Well, seen them up north, and now I’ve seen them down south. Northern and southern lights.

Southern Lights AKA Aroura Australis from John-Jo Ritson on Vimeo. 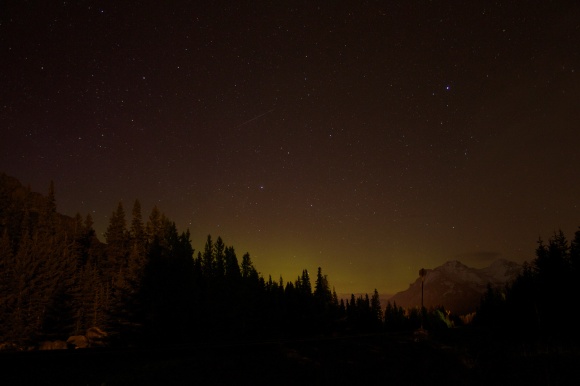 This is the first shot in the Timelapse sequence. Was shot on 25th April 2012. There has been lots of solar activity this year, but trying to combine the solar storms with; night time, clear skies, early warnings, and not being asleep can be quite the challenge. Even when the stars do align (scuse the pun) the lights may not show up! I have been lucky enough to see them twice in the last week. This time I managed to capture some of the show in a Timelapse.

The aurora borealis has been going off recently so I decided to do an Astro timelapse with the hope of getting the lights in there as well. You can see the green glow on the horizon which is the Northern Lights.

Creating this has inspired me to create more astro-timelapse while here in Canada as the stars here just blow me away.

Would love to be able to use a Kessler Slider with motion control to get some real camera movement. At this stage I am just really happy to have been able to witness and record such a cool event as this.

Below is a video I’ve entered into a film comp. The prize is $500 at Banff Photography. Should I be lucky enough to win I plan on buying a new lens; Tonika 11-16 mm F2.6 which would be PERFECT for astro timelapse.

Please watch the video and if you like it follow this link to vote. It is via Facebook, and the app will ask you to allow it, be assured it is a pretty non invasive app, mainly just needs your name etc to count votes and then if you want it to, it will post to your wall that you voted on it.

Thanks for taking the time to read my blog.

You can find more of my video work on my site

About the author:
Born in Warwick, England, John-Jo move north to The Borders, and the small town of Brampton. There he lived until he was 21. He then traveled to New Zealand and began snowboarding. Spending winters in Wanaka and summers in Sydney AU for 3 years he then began doing back to back winters between Wanaka, NZ and Banff Canada.

Shooting with the Canon EOS 7D is fun! I love this camera for my video work and more and more for taking STILLS! It is funny that I bought a DLSR for video and only occasionally take photos. But when I DO take them I am always blown away.

Waiting for the Northern  Lights last night I decided to take some long exposure photographs and experiment with the torch I was using. I have done this before in the first few days of having the 7D but I had time to kill so had another go. After all, experimenting helps us learn.

While I was there a few friends turned up and they wrote their names too!

Aurora borealis aka The Northern Lights have been on my list for years. “Which list?” I do not hear you cry! Well let me tell you. My List is a list of things and or places to experience. The List is ever growing and to be honest it is a way for me to put things on the back burner so to speak. I have made a few efforts this winter to head out and see the aurora borealis with no luck. They have either not shown up or shown up just before dawn on a work day (I was fast asleep by then).

Last night a good friend was in town and we had a few beers and a catch up. Home at about 1:30 I noticed some buzz on line about the lights and looked out the window.
“There is nothing out there!” said I.
“Look towards Cascade Mountain- they are going off!” Said they.
Already tucked up in bed, I decided to take life by the horns and within 3 mins was running down the street with all my camera gear in my back pack. At the end of our road there is a tree line / thin wooded area then train tracks with Cascade behind. I knew there would be little light pollution and was excited to find out!
As I came through the last few trees I could already see strange shapes and flickers in the sky!
Now, I have to admit, I had been drinking. I had helped to friends finish their drinks the bar closed. I have to admit I was a little drunk. However even if I was stone cold sober I believe my first reaction would have been the same.
Stood their, frozen to the spot, I swore. “Fuck me!”… The main shapes were slowly moving like high clouds, but clearly not cloud shaped at all. But the really impressive bit was the “flickering” that was passing over head, crossing the whole night sky so quickly and so otherworldy that I really grasped why so many people are captivated by the aurora borealis.
I must have stood frozen to the spot for only 4 or 5 seconds before I knew I had to get the camera out.

After a quick set up I set off a timelapse and stood in wonder and awe. I texted my Mum, Dad, friends and photographers. I called my girlfriend and told her to come down.

Towards the end of the show, I was trying to get a shot of my girlfriend surround by the lights but a train was suddenly approaching! I quickly turned the camera and jumped into the shot. 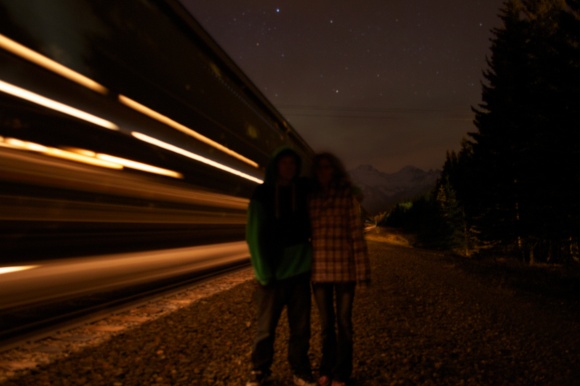 You can see the Northern Lights in the back ground. This was a 30 sec exposure, ISO 800.

We moved around a little during the shot as the train was REALLY CLOSE. DO NOT TRY THIS AT HOME KIDS!

It was very, very, very cool. I was using my Canon EOS 7D with the kit 18-55mm lens. It is a good lens.
But it is not a great lens. I got quite a bit of the sky line in the shot, but not as much as I wanted. Often the lights flickered and moved across the sky and I fought the urge to move the camera!

I have entered a video competition via Lake Louise Ski Area to win a FANTASTIC lens that would be able to capture about twice as much sky. It also has a a low F-Stop which would allow me to have shorter shutter speeds and lower ISO and a cleaner image all round. Not to mention the glass is higher quality.

I shot the entire video on the Canon EOS 7D. Used a mix of tripod, slider, handheld to get the feel I wanted.
The actual prize is a gift cert of $500 for a local photography shot (Banff Photography) but the Tonika 11-16mm F 2.6 is $850 so I would have to find that extra cash!

All this being said I need to win the comp first. You can view my video and vote for Roli Canoli : Smiling Faces here. Roland is a skier who often says “no poles no problem!” and loves to freeski without them!

Should I be fortunate enough to win I will be trying to capture more aurora borealis (with out drinking first!) and will also be able to shoot some pretty cool video!

Thanks for reading my blog, and if you voted for my video, thanks again!

About the author:
John-Jo has been an aspiring cinematographer since 2007 and is new to photography. Recently taking the plunge into the HDLSR world has now opened up creative doors in both worlds. Snowboard Instructing has been his main focus since 2006 and he set up RideClass Productions in 2009 to try to combine his 2 loves in life.